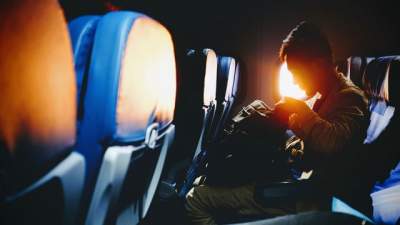 We care about our consoles, for better or for worse. These machines provide us with endless entertainment, connections, and ways to spend our free time. So, it’s only natural that we’re going to want to look after them when we fly with them.

Let’s face it, airport workers aren’t exactly delicate with your suitcase. If you’ve got a PS4 in there unprotected, chances are it’s going to get pretty banged up. Luckily, the TSA has accounted for video game consoles while flying, which we’re going to dive into now. So, if you’re looking for the complete guide to flying with video game consoles, you’re in the right place.

Can You Take a PS5 on a Plane?

You need to remove the console and place it in a separate tray at the security checkpoint whilst keeping the games in your checked luggage. Despite the PS5 using liquid cooling TSA and other airlines allow you to bring it on the plane.

Just see the tweet above of confirmation that a PS5 can be taken on a plane, although compared to the PS4 and the PS5 is HUGE! It’s the size of a small desktop PC. So, if you need to bring it on the plane with you, wrap it up in some bubble wrap that you get from Amazon and put it into one of your checked bags.

Not everyone has been lucky enough to get their hands on a PS5, though. That’s why I’ve highlighted the rules around traveling with Xboxes, PS4s, and Nintendo Switches down below.

Are gaming headsets really worth it? Learn the facts from a pro in my article.

Can You Take Xbox on a Plane?

You can take your Xbox on a plane. When you reach the x-ray machine remove your Xbox from the carry-on bags and place it in a separate bin as you’d do with a laptop. This needs to be done with any electronic device larger than a cellphone.

The TSA doesn’t take sides in the console wars. It treats both Xboxes and PlayStations as the same system, applying the same rules for both regardless of how you’re transporting it through the airport, see TSA reply to Aprils tweet above

The only real difference you need to keep in mind between the two is weight. In particular, next-gen systems weigh a fair bit more than their predecessors. This means that your bags might end up over the weight limit if you haven’t accounted for them. This is the only real way you should encounter any problems transporting your games consoles on a plane.

Most domestic airlines’ weight limit for checked luggage is 40 pounds if you’re bringing an Xbox Series X which weighs 9.8 pounds you might go over the weight limit depending on what else you have.

The Xbox Series S is a fantastic traveling console is it super small and small light weighing 4.25 pounds and easily would fit in any carry-on, if you are interested in seeing if it’s worth it check out my YouTube video

Let’s have a look at some of the other consoles you might encounter on your airport adventures, just to cover all of our bases.

Can You Bring a PS4 on a Plane as a Carry-On?

You can pack an Xbox, PS4, or other video game console in carry-on language. When you arrive at the x-ray machine remove any game consoles from your carry-on bags and place them in the separate bin as you do with a laptop. The issue with packing game consoles in carry-on is the space they take.

Now, you’re not exactly going to be able to play your PS4 on the plane unless you have some sort of suped-up gaming backpack setup. 99% of us don’t, though, so your reasons for bringing your PS4 as a carry-on should come down to wanting to protect it.

As we said, you can’t expect luggage workers to treat your bag with delicate care. So, if you’re worried about your PS4 getting broken in transit, it can make sense to bring it as a carry-on. Just make sure you leave room for all the other essentials.

Want to level up your PS4 experience? See my 30 amazing things the PS4 can do in my article.

Speaking of practicality, there is one console left that is seemingly built for this kind of thing: the Nintendo Switch.

Can You Take a Nintendo Switch on a Plane?

You can bring and play any small console like the Nintendo Switch on the plane, just ensure it’s switched to airplane mode before use.

I’ve played with my Switch on the plane numerous times in my travels, like with other consoles ensure you separate your Switch before going through luggage x-ray.

The Switch makes the PERFECT travel companion as it’s so small and takes up little to no space in your check-in bag. If you separate the joy-cons of the Switch it easily fits in a manbag or purse.

Want the best Nintendo Switch experience? I recommend you read my guide on the 30 amazing things your Switch can do.