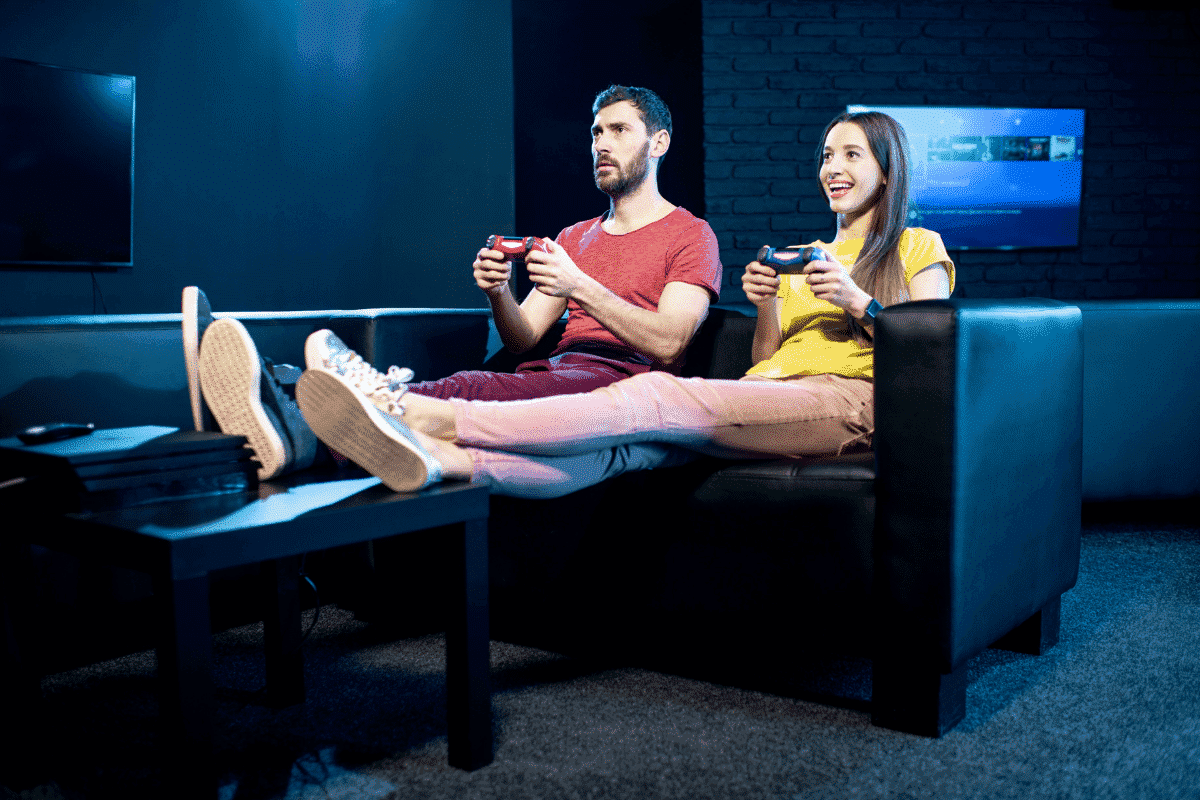 During the good old days when the Internet wasn’t a thing yet, multiplayer was exclusively limited to local couch gameplay for older versions of the PlayStation consoles (PS1 and PS2). Nowadays, is it possible for two players to play together online using the same PlayStation 4 console?

It’s shame game companies are moving away from the classic days of coach co-up, stick around and I will explain how to play online split screen on PS4, and what are the best local PS4 split sceen games. Read on to find out.

Want the best PS4 accessories? Treat yourself or a friend to the best PS4 products on Amazon by clicking here or the button below

How To Play Online Splitscreen On PS4

For PS4 games supporting split-screen gameplay, playing together online is usually as simple as turning on the second PS4 controller, in the multiplayer match lobby. The PS4 will then detect the second player automatically, and register the player as ‘Player 2’.

Remember that certain games may require different approaches to allow split screen multiplayer gameplay. As a general rule of thumb, always ensure that these are checked out first:

Other games, like FIFA 2021 and Overcooked 2, are already designed to allow local co-op (couch gameplay) for up to 4 players at the same time.

Playing video games together with other people creates that feeling of togetherness and purpose, and PlayStation understands this very well.

The PS4 can register 4 players at the same time to allow players to band together and breeze through those tough boss battles.

Want the fastest internet possible for your PS4? See my post on how to set that up.

If you are looking for some casual time off from competitive matchmaking, there are a few PS4 games out there that support local co-op gameplay for you to binge together with family and friends, online.

Here are some of the best local online PS4 games (unranked) that you can find on the PlayStation Store, and on Amazon via the links.

The Little Big Planet franchise kicked off in 2008, with the initial release being a PlayStation-exclusive game. Relevant to its cute, colourful and funny premise, the game is a puzzle-platformer that offers local and online support for players to enjoy some company with.

An intuitive take on split screen co-op, A Way Out follows the journey of protagonists Leo and Vincent in busting out of jail-time and hiding out from the authorities. A single-player driven experience, the game holds some unique set pieces which promote great teamwork, as well as some bits of action thrown into the mix.

A staple name across multiple platforms, EA continues its trend of enjoyable, arcadey football (or soccer) gameplay with its newest release, FIFA 2021. Graphically enhanced with new features to make it closer to its real-world counterparts, sports enthusiasts will love to add this to their yearly games collection.

Another EA entry on this list, Star Wars: Battlefront 2 has changed drastically from its initial 2017 release.

After receiving much flak about the game’s design (loot boxes, anyone?), the developers have held true to their words of revamping important game elements to make it a much more pleasing experience playing it this time around.

There are not many Role-Playing Games that offer local co-op/ split screen support, with which Divinity: Original Sin 2 provides. Rich with fictional lore, characters and story narratives, this turn-based, open world game will eat up many hours of your day, especially playing with a friend.

A game for all ages, Overcooked 2 is a wonderful take on the joy of preparing the finest dish to be served on a plate. Players can take to the couch and indulge in some entertaining moments of cooperative gameplay with friends, if you find yourself bummed out with some of your own cookings back at the kitchen.

This children-friendly collection of LEGO Marvel video games is sure to bring out the best in all of us! You can relive some of your favourite Marvel moments (both movies and comics), redesigned and rewritten in a much more comedic style. You can even play as Dr. Doom too, amongst the sizeable character rosters available!

First introduced in Call of Duty: World at War, this add-on game mode was initially introduced to serve as a side-game from the main storyline. However, the game mode’s popularity continues to surge throughout subsequent COD releases, culminating in the new game mode’s bigger scope of gameplay and cool features.

Another First-Person Shooter game on this list, Borderlands 3 adds another story-driven experience for you and your buddies to burn those hours away, together. Quirky yet almost self-aware of itself, the game is quite challenging on higher difficulties, which would serve as a welcome challenge for hardcore fans of the genre.

The weirdest yet most amusing entry of them all, Rocket League provides a new perspective of the words ‘entertaining’ and ‘fun’! Imagine FIFA, but with small toy cars! You need to play it, to understand why.